The world but not as we know it! 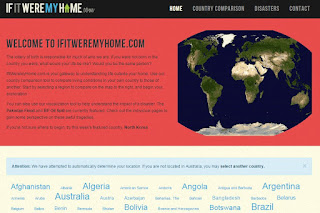 Image above: The if it were my home website to show global difference.


The geographical fascination with difference

The nature and extent of global difference is an important aspect of Year 6, 7, 8, 9 and 10 in the Australian Curriculum: Geography. For example in Year 6 the curriculum states that students:

"... learn about the diversity of peoples and cultures around the world, the indigenous peoples of other countries, the diversity of countries across the world and within the Asia region. They reflect on cultural differences and similarities ..."

Further country comparisons are implicit in the Year 7 Place and liveability,Year 8 Changing nations, Year 9 Geographies of interconnections  and Year 10 Human wellbeing units of the the geography curriculum. In essence, the curriculum supports the view that it is important for students to learn that it is the 'lottery of birth' that is responsible for much of what we have, how we think and who we are - for students to realise that if they were not born in the country they were, what would their life be like? Would they be the same person or would they be the person they are presently cautious of and possibly unempathetic to? The empathy of the plight of refugees and migrants is a pertinent example of poor geographical knowledge and understanding about the conditions in the places where these people have come from.

The If It Were My Home website is described 'as a gateway to understanding life outside of the world' students know and inhabit every day. The site has a country comparison tool to compare living conditions in the users country to those of another. Based on data from the CIA Factbook, the site describes comparisons on factors such as birth rate, life expectancy, healthcare, wealth, disease, resources, employment, class and incarceration. 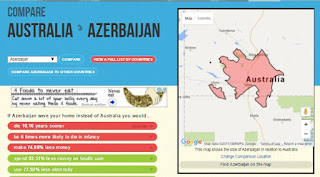 As shown in the map above, the site also provides visualisations of spatial comparisons i.e. how large is the land area of Azerbaijan compared to Australia. 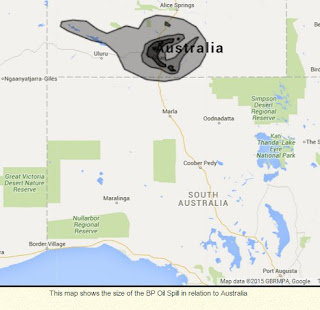 The power of maps to show difference

Whilst on about the power of geography to develop the understanding of difference from place to place, I thought the following ESRI webpage would be worth considering. In fact, maps are the tools that geographers normally use to visualise data to see and analyse differences across space. The site is called '6 things that modern maps do'  and it is certainly an interesting discussion on the power of maps to develop understanding of differences between places. 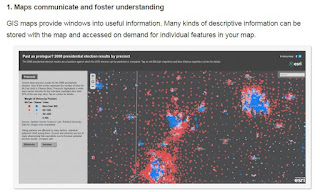 Posted by Malcolm McInerney at 3:39 PM No comments: 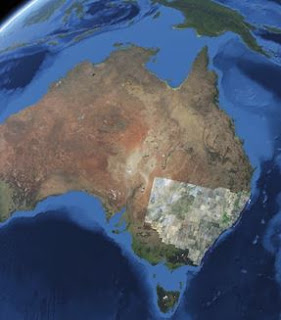 Image above: NSW Globe, just one of the great sites used by Mick Law in his AGTA Roadshow presentation.


Ooh's and Wow's at AGTA Roadshows

Last week I had the pleasure to participate in the AGTA Roadshows in Canberra, Newcastle and Sydney. The roadshow programme was not only a great way to make contact with hundreds of teachers in NSW and ACT to talk geography but also to work with some real stars in geographical education. Grant Kleeman, John Butler, Susan Caldis and Mick Law took part in the roadshow with me and certainly enthused those who attended. I must say, the one who got the most ooh's and wow's is Mick Law from Contour Education when he shared his amazing knowledge and experience in using spatial technology in the classroom. The next few Spatialworlds blog postings will share a few of the resources Mick presented.

This posting  showcases Mick's new Queensland Spatial Educators’ Toolkit (QSET), a one-stop shop of achievable, engaging and curriculum related sites for teachers to use. The toolkit is an excellent spatial technology resource for the Australian Curriculum: Geography 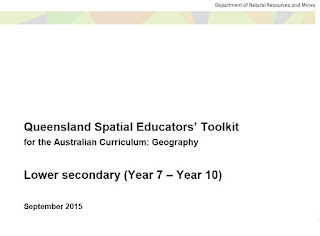 The resource does refer to some Queensland-specific tools but most of the over 130 freely available 'learning experiences' (Queensland education jargon) tools that can be used at all year levels by any teacher in the country. Each year level of the Australian Curriculum: Geography is addressed from F-10.

See the toolkit at: https://www.dnrm.qld.gov.au/qsic/spatial-education

For further information regarding QSET please contact Mick Law from the Queensland Spatial Information Council on  07 3406 2807 or via email spatialeducation@qld.gov.au

Mick is available to work in schools and with partnerships/clusters of schools  and certainly does some great work supporting teachers to master the spatial technology learning curve.
Posted by Malcolm McInerney at 10:44 AM No comments: 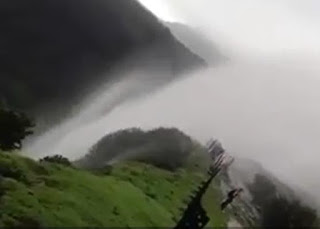 
Getting back into it!

I have been busy in my non-geography DECD world during this year and as a result the Spatialworlds blog postings have been limited. As I begin to leave the bureaucratic world behind upon retirement from DECD, I can get back into the fascinating spatialworld of geography. Here are just a few neat sites I have come across in the past week. Plenty more to follow!!

* Mapping immunisation in Australia -   great example of the power of maps

The federal government has announced it will withhold childcare benefits for parents who do not vaccinate their children. What areas of Australia have the lowest child immunisation rates? Here is another example of the power of maps to show difference across space. The question as always, is why dos the variance occur from one place in Australia to another , in this case about immunisation rates. 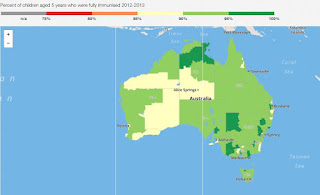 This map shows the per cent of children aged five years who were fully immunised 2012-2013. It's a choropleth map - areas are shaded in proportion to the measurement.


The areas shown are the Australian Bureau of Statistics (ABS) Statistical Area Level 3 geography standard (SA3) - a standardised regional breakup of Australia for the analysis of ABS data. The SA3 areas have populations between 30,000 and 130,000 and they are often the functional areas of regional cities and large urban transport and service hubs.

* Guess the country outline: just some spatial fun for students 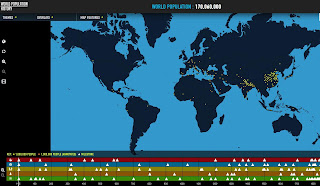 * Some great geography games for this time of year

Spacehopper is a game based on Google Maps Street View imagery. Spacehopper shows you a Street View image and you have to guess where in the world the image was captured. You can click the clue button to have the country identified before making a guess. After three incorrect guesses the correct answer will be revealed to you. You can play Spacehopper on a global level or you can specify that you only want to see images from a particular continent.

Overlap Maps is a free service that can be used to quickly compare the size of countries, states, provinces, and some bodies of water. To create a visual comparison of two countries select one country from the "overlap this" menu and select one country from the "onto this" menu. The comparisons you make are displayed on a map. You can make comparisons from different categories. For example, you can overlap Lake Erie onto New Hampshire.

Where is...? is another good game geography game. This game uses a popular format for geography games; the name of a city is presented to the players and they have to click the map to guess where the city is located. Players are given immediate feedback on their accuracy in the form of a measurement, in kilometers, of the distance between their guesses and the correct answers.

Smarty Pins is a Google Maps game develop by Google. Smarty Pins presents players with a trivia question that they have to answer by placing a pin on a map. Players earn "miles" for correctly placing a pin on the map. Players can lose miles for answering incorrectly and or taking too long to answer. Games are available in five categories; arts & culture, science & geography, sports & games, entertainment, and history & current events.
Posted by Malcolm McInerney at 12:42 PM No comments: