A clock with a difference 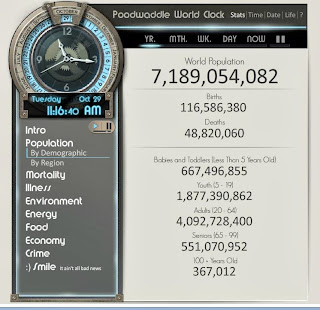 Image above: The Poodwaddle clock interface.


Poodwaddle is an excellent resource to highlight the dynamic nature of statistics (and to question the origin of and veracity of data). There are many such population clocks available on the Internet but this clock does a little more than most. It breaks much of the data into regions and various categories and shows more than just population. The clock also counts mortality, crime, illness, environment, energy, food, economics and even happy things like 'first kisses' in real time. The site also hosts a life expectancy test to personalise the data. Obviously questions arise on the reliability of the data but the clock provides a great entry or teaching point on demography and diversity around the world.

Posted by Malcolm McInerney at 3:31 PM No comments:

Email ThisBlogThis!Share to TwitterShare to FacebookShare to Pinterest
Labels: population 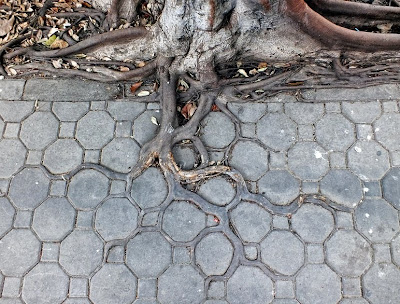 Image above: The power of nature to fight back!


An interesting angle on human rights and the environment

Last week I worked with my Year 12 Society and Culture students on presenting an oral as an advocate for human rights. Matthew, one of my students developed a paper  that argued that the ultimate human right is the protection of the environment. Only a night or two before I had watched David Suzuki on Q&A argue a similar line when he said:

"I believe what's going on now is criminal, our activity, because it's a crime against future generations," Suzuki said. "And there ought to be a legal position of inter-generational crime. And I think there's criminal negligence."

Here is the transcript of the oral Matthew presented to the class with great passion and thought. An interesting and I would say important angle when we talk about human rights, particularly in a geography class!

The right to life is our most important right of all. Without it, all others rights do not exist.
Article 3 of The Universal declaration of Human Rights states:

‘Everyone has the right to life, liberty and security of person.’

This is a right that all human beings are entitled to.

Of course, with all rights come responsibilities. However, we as humans have neglected our responsibility of ensuring that this right to life is passed on to future generations.
Now this may sound a tad extreme, but we are destroying the future of future generations and our most important asset of all, the environment.

When many people think of the health of the environment, they think of it as merely the well-being of plants and trees.  But they fail to realise that it is also a critical human rights issues and that our quality of lives are deeply affected by it.

According to a report conducted by the United Nations International Panel on Climate Change, human activity has caused at least half of climate change in the last half century.
The report has also stated that the world is getting hotter, sea levels are rising and there are natural disasters occurring more frequently causing unnecessary deaths of many around the world.  So when we harm the environment, we in turn, also harm humans. The health of the Earth affects the health of the human race.

‘Everyone has the right to a standard of living adequate for the health and well-being of himself and of his family’.

But if we continue to decimate the environment, people in the future will not have this fundamental right.

Today I would like to introduce a newly created term with you all, Ecocide. Ecocide is the biggest threat to the human race on this planet. But what is Ecocide you may ask?

Ecocide is the extensive damage to, destruction of or loss of ecosystem(s) of a given territory, whether by human agency or by other causes, to such an extent that peaceful enjoyment by the inhabitants of that territory has been or will be severely diminished.
The most disturbing aspect of Ecocide is that it can be irreversible when an ecosystem suffers beyond self-healing.

It’s also important to note when speaking about ecocide, that is a problem facing the entire world. Ecocide is happening right now as we speak. Around the world, businesses are destroying our environment, doing everything they can to make a profit.

Deforestation, which is the removal of forest that is then converted to a non-Forrest area, oil spills, toxic dumping, deep water mining are all of examples of Ecocide that are occurring around the globe. These procedures are not only harming the environment, but also our quality of life. Throughout history there have been conflicts over the control of natural resources such as diamonds, coal and oil which have seen the destruction of the environment and loss of many lives.

If our most basic resources become more scarce around the world, then it would seem likely that just in just a few generations time, countries could be waging wars over our most basic needs such as food and water.

So that’s why I am advocating for the implementation for a law that makes the destruction of our environment a crime, and for the crime of ecocide to be added to the list of international crimes against peace. Now that might seem like a fairly ambitious goal, but I believe, if enough people can get the United Nations to take notice of this issue, and make ecocide an official crime, we can eradicate ecocide.

But we can only achieve this if each and every one of us takes on board the responsibility on preserving the environment. If it’s something small like putting recyclable material in the recycling, or taking public transport to work one a week instead of driving to work and polluting the air, we can all play a role in preserving the health the of OUR ENVIRONMENT.

By doing this, we will ensure that next generation will be able to have the great quality of life that we have today, and so will the generations to come.


Thanks Matthew for making us 'think out of the box".
Posted by Malcolm McInerney at 12:18 PM No comments:

Image above: A screen capture from the South Australian Department of Education and Child Development (DECD) Teaching and Learning resource to support the implementation of the Australian Curriculum: Geography. A great free resource!

Certainly worth a look!

Over recent months I have been working with DECD on their "Making the Australian Curriculum work for us' resource to support the teaching and learning of the Australian Curriculum: Geography. The resources comes out of the 'Teaching for Effective Learning' initiative of DECD.  Lyn Jefferies (DECD Manager Pedagogy R-7) is involved in developing the materials and is doing some great work in ensuring the resource is useful to teachers and students . Lyn has recently posted on the DECD site the bits and pieces referenced in this blog posting. They are certainly worth a look!

As you can see below the resource to date includes a creative animation, broadsheets on the curriculum and 'talking heads'. I understand there will be plenty more useful things to come.  It is great to see a jurisdiction doing such high quality and innovative work to support the implementation of geography in South Australian schools and inevitably beyond.

The Story of the learning areas animation. An excellent animation on 'What is Geography for'.

Talking head on geography (sorry for the head!!) 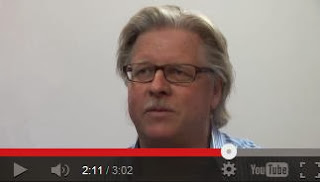 The geography curriculum, year by year, all on one page in the Learning Area Explorer. 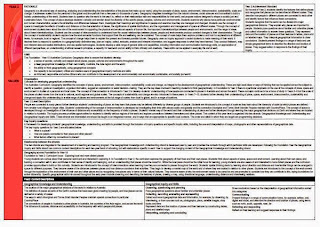 Sound bites from the public on their perception of geography. 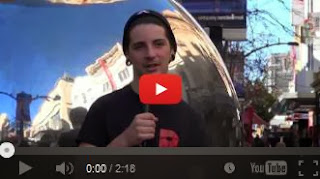 I encourage you, wherever you may be, to use these resources in any awareness work you are doing with your colleagues on the Australian Curriculum: Geography (or just on geography!).

Posted by Malcolm McInerney at 11:58 AM No comments: 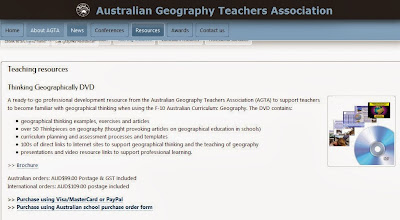 AGTA has recently released for sale a resource produced to support professional learning in geography. The resource is called 'Thinking Geographically' and focuses on the teaching of the  Australian Curriculum: Geography.

The 'Thinking Geographically' resource is in the form of an interactive DVD and is aimed at preparing geographers and non-geographers in Australian schools to deliver the new Australian Curriculum: Geography from 2013 and beyond. Despite the Australian focus, the resource would be of equal value to any country teaching geography as a subject in schools.
The resource highlights the need to clearly articulate what geographer involves, to be able to explain what makes geography geography. The development of the key concepts of the Australian Curriculum: Geography has been invaluable in articulating geographical thinking.  Some say that everything can be studied geographically through the key concepts - hence every topic is a potential resource for geography classrooms.

The resource comprises a range of Geographical 'think pieces', articles and presentations, tips and structures for curriculum planning and hundreds of Internet sites to support geographical education in schools. The attached document provides a useful insight into the operation and nature of the resource.

AGTA considers that the resource will be a useful part of the implementation and associated professional learning for the Australian Curriculum: Geography and any other country teaching geography in schools.

If you wish to purchase a copy of the interactive 'Thinking Geographically' DVD go to the AGTA site to download the order form or pay by PayPal via the site.

AGTA hopes that the resource will hit the mark with professional learning on thinking geographically.
Posted by Malcolm McInerney at 1:33 PM No comments: